Where does a song’s innocence end?

LILI MARLEEN
Who doesn’t know THE great song from the Second World War which led to a ceasefire on all fronts, saving the lives of countless soldiers. The song that Goebbels first banned and then promoted, was considered by John Steinbeck to be the most beautiful love song in the world, its title synonymous with the singer.

LALE ANDERSEN
The woman who in 1929, six weeks after the birth of her third child packed her bags, husband and children and left, in search of self-fulfilment, because she wanted to act and sing – and because she wanted to join the theatre. She was the woman who was praised for her sailors‘ songs as the North Sea in person, internationally adored and celebrated as Lili Marleen and denounced as a Jew lover by the Nazis. Because:

The TRUE LOVE
of the Northern German singer was the Swiss composer and later director of the Hamburg and Paris opera houses, Rolf Liebermann. Lale Andersen tells the story in great detail in her autobiography „The Sky has many Colours“ (1972). Rainer Werner Fassbinder based his film „Lili Marleen“ (1981) on this love story. Gilla Cremer and Gerd Bellmann – the well practiced team of the acclaimed production „The Sinner – Hildegard Knef“ approached the subject with great acting zeal and, interlaced with many songs, adapted it for the stage.

An evening that was great fun and one that moved the audience to tears. In her new programme “On all fronts: Lili Marleen and Lale Andersen” at Kammerspiele, the splendid Gilla Cremer takes us on a journey through the wild life of a world star. A journey through time of exhilarating intensity.
The enthralled and spellbound audience follows the milestones of the unique career which is inseparable from the song that went around the world in 1939: Lili Marleen; Radio Belgrade’s song of perseverance for soldiers, a Second World War hit that fascinated friends and foe. Where Gilla Cremer traces the destiny of a modern woman who has to chose between the love of her life, the Swiss musician Rolf Liebermann, and her beloved career, and in which she evokes the fear felt by the woman who toured the warfront and the misery of the singer under the Nazi dictatorship: this enchanting actress who portrays so many different traits in her solo play together with her accompanist Gerd Bellmann gave a totally convincing performance from the first to the very last note.
(Hamburger Morgenpost)

The evening ended with bravos and standing ovations for Gilla Cremer, who delivered a brilliant 2 1/2 –hour performance as Lale Andersen in “On All Fronts”. The audience celebrated the actress who from the opening moment showed a touching authenticity and delivered a bravura performance. Together with her pianist Gerd Bellmann, who also sings the male part and who plays the accordion, Gilla Cremer searches for traces and unfolds the life of a rather mediocre singer who – somewhat accidentally – came to world fame with just one song: Lili Marleen. It was Radio Belgrade’s signature tune during the war, later reinterpreted over and over in endless new versions. With sparkling elegance and enthralling drama Gilla Cremer brings off this entertaining interplay. She draws attention to every facet of the contradictory artist Lale Andersen (1905 – 1972), who abandoned her three children for her career.
She lived through highs and lows because of her love for the Jewish composer Rolf Liebermann, and at the peak of her career was banned from the stage in Nazi Germany but went on to experience a great comeback after the war.
(WAZ)

Where does a song’s innocence end?
Brigitte Landes presents the Lale Andersen night at Kammerspiele with Gilla Cremer in the title role

Liese-Lotte Helene Berta Bunnenberg – not a name that is really made for an ambitious life. Lale Andersen sounds so much better. She is the subject of the musical play by Gilla Cremer, which brought the house down at Kammerspiele, and with very good reason. “On all Fronts Lili Marleen & Lale Andersen” is the sober but fitting title of this world premier, since Lilli Marleen was the “song of a young guard” which became the soldiers’ hymn and made Lale Andersen a world star.
Before Gilla Cremer steps on to the stage in a sailor’s suit to sing the first song “Das Meer”, a prologue relates the story behind the hit “Lili Marleen”, which is still sung on all frontlines today. Already in the prelude the quality of this production by Brigitte Landes is evident, which is not just content with the marvellous singing and acting of Gilla Cremer and her congenial musician colleague Gerd Bellmann on grand piano and accordion, but tells Lale Andersen’s story with historical accuracy. From the outset we sense the danger and threat the artist’s personal life choices and political times entail. The irrepressible will of a young woman who marries aged 17, leaves a husband and three children, the youngest only six weeks old, to find herself in the theatre, is intertwined with a bitter tainted love story and the necessary highwire act of performing in the Third Reich while staying true to herself. In a mixture of insouciance, passive collaboration combined with a cunning dodging of the ban on singing “Lili Marleen” in concert, Lale Andersen finds a way of saving herself.
With only a few props (stage designer Hannah Landes merely needs a lantern, an old gramophone and bundle of uniforms) as well as lots of songs and thespian abilities in abundance, Gilla Cremer conjures up Lale Andersen’s character before us without imitating her. Deeply touching, but never maudlin, using only her voice in funny or terrifying characterisations of other people, we join her, mesmerised, and submerge ourselves in the biography of Lale Andersen.
(DIE WELT) 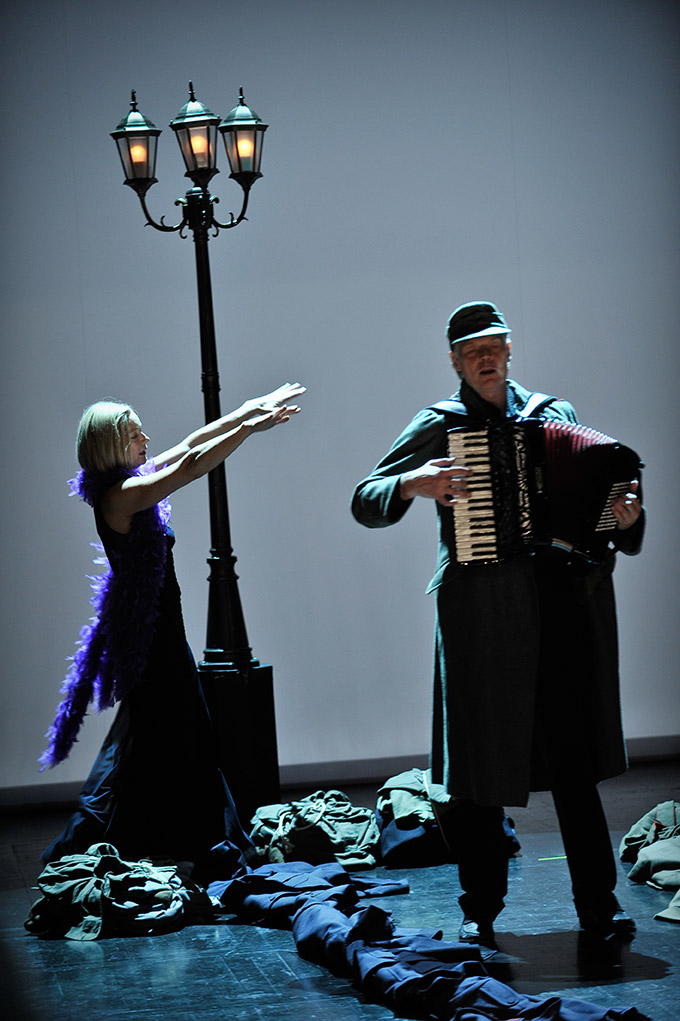