The Bitch of Buchenwald (Die Kommandeuse)

Psychograph of a Nazi perpetrator

„You have to understand to go with the times“ ‚ this is how the young Ilse Koehler justifies joining the NSDAP in1932. She meets Colonel Karl Koch and in 1937 moves to Ettersberg, a lovely hill near Weimar on which Goethe once wrote „Wanderers Nachtlied“. Here Koch becomes the commander of the Buchenwald concentration camp. The years spent in the „Villa Koch“, which was located directly next to the concentration camp, are later described by Ilse Koch as „the best times“ of her life; times of abundance marked by a luxurious and dissipated way of life.

In 1951 the „Commanderess“ – this is what the prisoners called her as a result of her cruel and unpredictable behaviour at the camp ‚ was sentenced to lifelong imprisonment for inciting manslaughter and murder. In post-war Germany Ilse Koch filled the headlines as the „Bitch of Buchenwald“ and even after 22 years‘ imprisonment still claimed: „I can’t remember anything. I never concerned myself with camp matters or politics. I always did my best to be a good wife to my husband and a good mother to my children.“

The production has guested in English in France, Denmark, the Netherlands, Hungary.

"The brute – one of us..."
"A surprisingly intensive approach…"
"Cremer manages to embody the conflicting mixture of sex appeal and ice-cold atrociousness…"

„Without accusatory pathos, with nothing but the sensitivity of an actress who puts herself in the place of an inscrutable character, Cremer manages to depict a surprisingly intensive approach. Dressed in a knee-length dress and dustcoat, she stands on stage with just her voice, her body. And it is as if she were listening to herself and this other woman. With deliberately simple hand gestures, she accompanies her words, read from extracts of jottings written by Ilse Koch: fragments of memories from her youth, married life and daily life at the concentration camp; reflections about German culture, fits of megalomania. There are no garish moments in this emphatic solo performance. The horror manifests itself in the banality that has lost every sense of humanity.“ (NP)

„Cremer manages to embody the conflicting mixture of sex appeal and ice-cold atrociousness, as well as the banal ambitiousness of the shorthand typist whom the structures of the terror regime have allowed to let her crude desires run free.“ (SZ)

„The Bitch of Buchenwald“ achieves the impossible: political theatre, yet entertaining and didactic, aesthetic and gruesome at the same time.“ (LN) 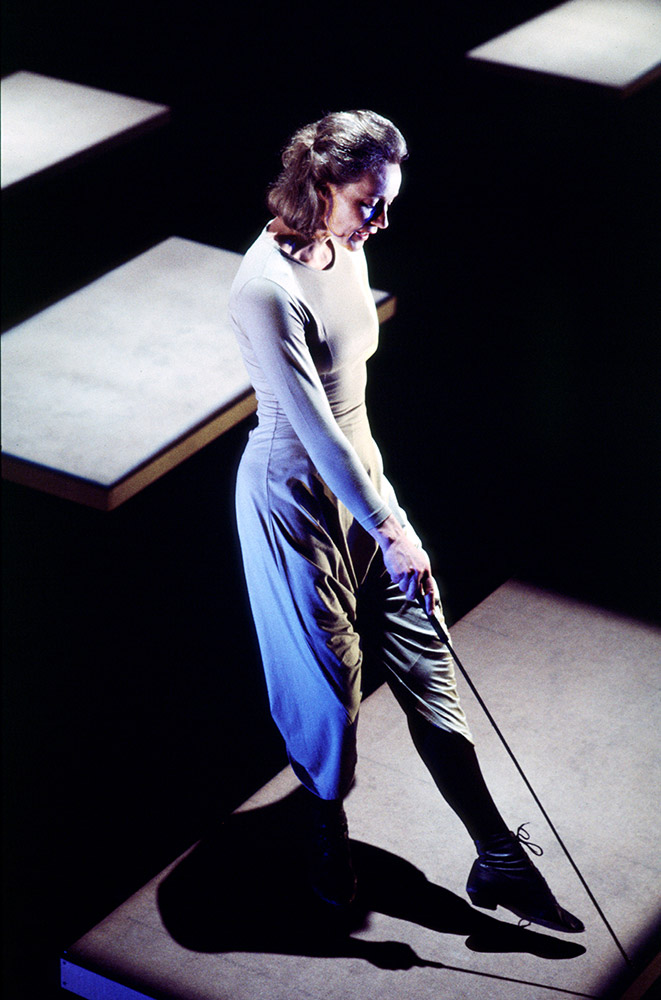