The remnants of life

Agnes is standing in the house of her deceased parents. This is where she grew up, this is where Father and Mother lived for 60 years – now it has to be emptied out. Where should one start? In the cellar or in the jam-packed loft? There still seems to be so much life clinging to each object: a familiar smell or a story. Keep it? Give it away? Sell it? Throw it away? Memories of one’s family and one’s childhood lurk in every drawer and cupboard. Agnes comes across letters and diaries that weren’t meant for her. “Let go of the remnants of life” is what a professional house clearing guide says.

If only it were that simple…

"A painfully beautiful evening at the theatre…"
"A powerful theatre experience…"
"A highly moving performance…"
"A fantastic show..."

At the end, the table has stopped the conversation, the cutlery is silent. The objects have lost their tongue. They’re just objects now. Agnes has cleared out her parents’ belongings. Outside the front door, the container from the clearing-out service stands packed and ready to be moved. What’s left are memories.

Gilla Cremer is Agnes in her wonderful stage solo “My Parents’ Things” at Hamburg’s Kammerspiele theatre. Agnes is one of four sisters tasked with clearing out the house after the death of their parents. Three of the sisters have little time and soon have to leave to get back to their families, back to their jobs, and left is Agnes – and with her a house full of stories where her parents lived for 60 years and where the children grew up. A house where the objects start to speak.

On stage, there are countless cardboard boxes stacked in the form of a house, and an ornate floor lamp. Agnes has got herself a professional house clearing guide to help her systematically empty the house. “A good list makes everything easier,” she says, and starts to read out a furious monologue of all the items that are in the house. From the cellar to the loft. From the preserving jars – the oldest of which date back to 1964 – to the stone axe that her father used to rave about. Agnes has recorded that there are exactly 17,598 objects in the house, but how many things does one really need? “Two: the stone axe and the smartphone.”

Under the direction of Dominik Günther, Gilla Cremer manages to strike the right balance between touching and humorous moments. The objects tell Agnes little sometimes already forgotten stories – about the cuddle gap between the two mattresses in her parents’ bed that she as a little girl used to wangle her way into, about the “primordial mother scent” of the dressing gown that she loved so much, about the moment when Agnes asked her mother whether she believed in God and her mother replied, “No, I don’t believe in God, but I miss him.” And about her father’s strict rituals at the dinner table: “First chew, then swallow!”

Meanwhile, Gilla Cremer drags one cardboard moving box after the other out of the house and, in a highly visualized way, deconstructs the system of “family”. Until, in a last gesture of angry rebellion, Agnes knocks down the whole house of cardboard boxes with a kind of Nibelung sword. That’s what your feelings on this journey through time to a childhood in the ‘60s and ‘70s do: they wade through miry valleys, they fly over lofty heights. Family is something you have, friends are something you choose.

And Gilla Cremer takes the audience by the hand in every scene, many of whom know this biographical cut, have experienced and suffer it themselves: the death of their parents, clearing out their house, the deluge of emotions that comes gushing in from the past and catches you unawares. When simple objects – a mirror, a suitcase, a sewing machine – rekindle memories and start talking about the past.

“As always – let’s hope for the best” is what mother always said. The mother who died so suddenly and left her daughters a house full of old life. Gilla Cremer has turned this into a moving, bitterly humorous solo. (Hamburger Abendblatt / Volker Albers)

A painfully beautiful evening at the theatre: terrifically talented Gilla Cremer’s “My Parents’ Things”. In her stage solo, she emotively confronts us with a subject one would usually rather not think about. In her sister’s opinion, “everything that is left of the person’s life can go”. But Agnes lets the mementos entice her to accompany them on short journeys through time. …

Sublimely Gilla Cremer evokes the conflicting emotions that went hand-in-hand with a childhood in the ‘60er and ‘70s. A powerful theatre experience that will most probably stir everyone in the audience, leaving them to recall memories of their own family’s past. (Mopo)

So what is it really – our own life?

Gilla Cremer plays her latest Theater Unikate production enchantingly with a very special touch of melancholic tenderness coupled with distraught and angry outbursts. Flashbacks make tangible the child that Agnes once was when the family machine was still running at full speed. Her story also has humorous sides to it, and Gilla Cremer makes sure Agnes doesn’t wallow in self-pity but can unfold a wonderful mixture of mental overload, practical ways of coping with life and little excursions into dream worlds – just plain normal life. …

At the end of a fantastic and much applauded evening, Gilla Cremer has knocked down the house she has formed of cardboard boxes (set design by Eva Humburg), has destroyed the family’s shell. Has creatively played with the cardboard boxes and made her memories visual. And at the same time she has accepted the fragile construction of “family” as a constituent brace of her own life. Most of the parents’ things can be discarded, ultimately, they are simply the exterior that have made you the person you are. With all the anger, the tenderness, the cluelessness and helplessness after the end of a life together with one’s parents. And with the realization: Whatever they were and did – they’re the only parents we’ve got. 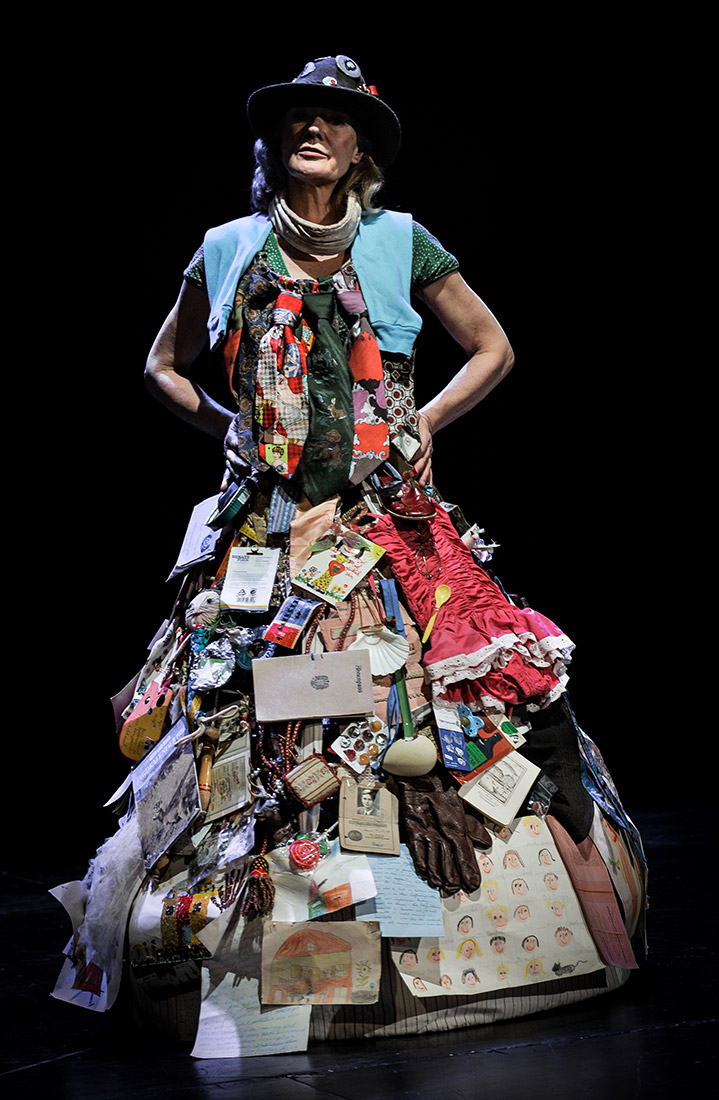